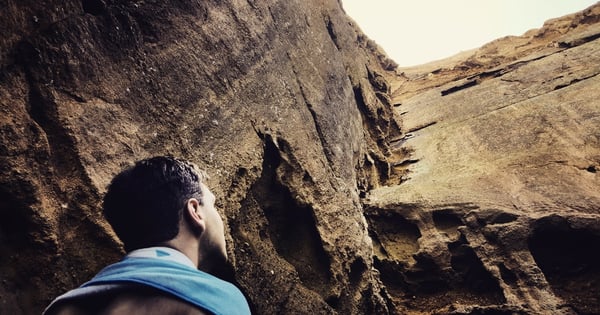 We perceive that only through utter defeat are we able to take our first step toward liberation and strength. Our admissions of personal powerlessness finally turn out to be firm bedrock upon which happy and purposeful lives may be built. Alcoholics Anonymous The Big Book.

A few days ago, I was mindlessly scanning Twitter before I went to bed. And during this scan, I came across something that took me out.

Ben Patrick Johnson is a renowned voiceover artist. In many ways, he inherited the mantle of the late Don LaFontaine as one of the main voiceover artists for movie trailers and TV show promos. Hes also an author and LGBT advocate.

The thing that took me out was a tweet he made about the homeless shelter he used to live in one year ago.

How could a guy who has the voice and talent he has ever be homeless? So, I started doing a little digging and found that dudes story gets quite complicated.

Johnson penned a powerful and moving essay on a website called stigmafighters.com. Here are the bullet points of his story.

Long-suffering from depression, an ex-boyfriend introduced him to crystal meth. As his use of meth grew, his behavior got out of control. During the height of his addiction, Johnsons husband hit him with his car during a fight. One thing led to another and Johnson managed to get kicked out of where he was living. Just he and his dog and what few belongings he had.

On the outside, he doesnt seem like the kind of guy whod get involved with something like this. But perception is everything.

In the piece, Johnson writes I am sober. I have found rock bottom and with it, I pray, bedrock.

I encourage yall to read this essay. Its dated February 2, 2019, and its amazingly powerful.

But my favorite story of redemption from hitting rock bottom is the story of a single mother in England during the mid-90s. Depressed, suicidal, without work, and living on public assistance.

Yet she had a big idea, an old typewriter, and vision.

She loaded some paper into her typewriter and started typing. She had an idea about a child wizard who went to a boarding school.

That child wizard was named Harry Potter and the single mother was Joanne Rowling JK Rowling. More than 500 million copies of the Harry Potter books have been sold and the books have been translated into 80 languages. To say nothing of several blockbuster films that have been made based on the series.

She went from living on public assistance to becoming the worlds very first billionaire author.

Rowling once said, Rock bottom became the solid foundation on which I rebuilt my life.

Rock bottom isnt necessarily that moment you find yourself in a homeless shelter or youre suicidal because you feel like nobodys going to believe your story.

To borrow a phrase from one of my favorite films of all time, Network, I like to think of hitting rock bottom as Im mad as hell and Im not gonna take this anymore moments.

Do you have a dream of becoming a Navy SEAL but need to lose more than 100 pounds before you begin training in three months? Id call that a rock bottom moment for David Goggins. He wasnt homeless. But he was depressed, overweight, and in a terrible job. But Goggins got his a$$ in gear and made it happen.

Side note if you havent read his amazing memoirCant Hurt Methen you need to fix that mistake. That book is amazing, and Goggins story blows my mind.

Im just saying, rock bottom doesnt necessarily mean that you find yourself face down in a gutter covered in puke after an all-night drinking bender.

On the afternoon of January 3rd, 2020, I found my rock bottom. That, of course, was the day I was let go from what I thought was my dream job.

As Ive shared before, I wandered to a nearby park bench. I sat down and I felt like my soul had left my body. My soul had left its skin suit, as it were. And sitting on that park bench, I absolutely wished I was dead.

As I came to grips with what happened, I unknowingly started taking on a few practices that meant a lot as I started rebuilding my life. And Id like to share these practices with yall.

Feel your feelings it seems very Mr. Rogers-ish but hear me out. I dont speak for every man, but many of us hate feeling feelings other than happiness. But trust me on this, gentlemen. You must, you must, you MUST feel every little feeling that comes up. The good, the bad, the happy, the sad, and the ugly. Cry, take a golf club to a pillow, go set a personal deadlift record do whatever you have to do but feel your feelings. I say this because so many addicts and I am an addict as Ive shared before (love and pity addict) numb out our feelings with our addiction of choice. Thats not an option in this situation.

Take extra care of yourself Think about this, your soul has been shaken. Your body more than likely has been twisted into some dangerous knots. Youve gone through hell yet youre still alive. Drink extra water, hit that extra set at the gym just because you want to, call that woman you used to be scared to talk to.

Forgive the situation What do I mean by this? When you find yourself hitting a rock bottom moment, I guarantee you some feelings of shame and anger will come up. Youll get pissed off by everything if I cant drink, why cant anyone else? Youll hate yourself why did I ever let myself get into this situation? How could I be so stupid? I cannot stress this enough, forgive!

Forgive yourself We life coaches call this getting complete. Let me ask you this: what did you have for lunch on Tuesday? Unless youre reading this on Tuesday as youre eating lunch, Im pretty sure you wont remember what you had. So long as the situation and whatever landed you in this rock bottom moment still holds any energy over you whatsoever, youll never get past it. Forgive yourself.

Dont go it alone Be with people. I saw friends of mine two days after I got fired. Join a 12-step group. Get into therapy. Find a coach. Do not go this alone!

Is my situation well? No.

Is it better? Absolutely!

Im making some really powerful connections. Im taking deep care of myself. Im creating magic in my life. And I believe its all because I hit rock bottom.

Were all going to hit rock bottom. Heres my question do you love yourself enough to do what it takes get out of the hole?

The Super Mario Bros. Movie Trailer Breakdown: Give Me Rainbow (Fury) Road Or Give Me Game Over
November 29, 2022

8 Critical Causes to Donate to This Holiday Season
November 28, 2022