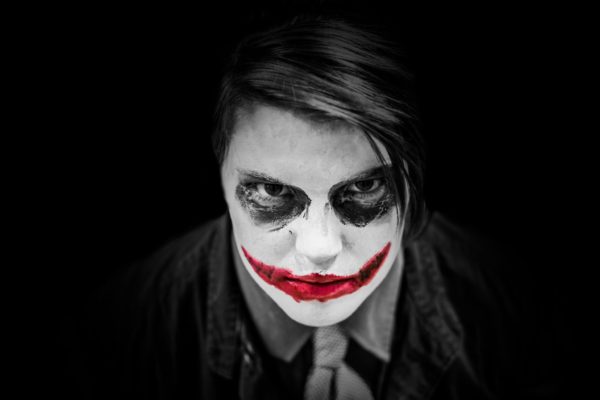 I took my kids to see the movieJoker last weekend. I had seen the trailer and thought it looked a bit dark it was supposed to be about the origins of the Joker and a precursor to the Batman movies. I thought, How could we miss this?!

After the movie, I felt like I had been visually assaulted. The sheer violence and disregard for human life, the super-realistic depiction of blood, guts and gore stunned me.

I thought to myself, Surely this movie shocked my kids too. I was looking forward to ripping into the fucked up, horrifying vision of the creators with the support of my kids moral outrage.

Boy, was I wrong.

They thought the movie was well done, superbly acted and deeply thought-provoking if maybe a bit slow. They thought the violence was not over the top nor disturbing at all.

Immediately, I hopped high up on my moral mare and dished out some judgment. I was offended by their lack of compassion for the victims. I thought them callous in their disregard for the pain and suffering of those heinously slaughtered by a psychopath in a clown suit. I thought it was indicative of allthat is wrong with the youth of today.

After briefly stating their opinions and upon hearing my reaction, they dismissed me as narrow-minded and uneducated about the state of the world today and simply refused to discuss it any further.

I was left stymied and chock-full of unexpressed opinions.

Their apparent lack of a moral compass scared me and I began to wonder where I had gone wrong as a parent or even worse, as a mother.

I had a hard time sleeping that night and the next several nights. I tossed and turned as my mind replayed every possible argument that would end with me being right and them acquiescing to the fact that they are suffering from moral corruption and desperately in need of my help.

Since the youth of today cannot, as a whole, be sociopaths, that line of thinking wasnt supportable. I had to continue my search for validation of my personal opinions.

So I then concluded they were innocent victims of an increasingly indifferent society that was slowly sinking into moral degradation. I felt sorrow for them that they were growing up in a world where violence is not only in their games and entertainment but also in the real world in the form of random acts of violence. I found a shocking statistic that as of September 1st there have been 283 mass shootings this year alone in the U.S. (A mass shooting is 4 or more people shot not including the shooter.)(By Jason Silverstein September 1, 2019/CBS News)

I pitied them not recognizing that I was still up on my high horse looking down on them with judgment only this time it was under the auspices of empathy. I had embraced the role of an all-knowing, empathetic being staring down upon the trodden masses of youth with condescension masked as compassion.

When I realized I was still in judgment I decided to meet with my daughter and asked her to share her opinion on the movie with the promise that I truly wanted to understand what it was she thought and why.

She told me that she saw past the violence in the movie. What resonated with her was a dark story about mental illness being brought to light by a writer, director and, in her words, hundreds of people all working to create something meaningful.

The Joker was failed by the very system that was supposed to help him.

She saw it as a vivid commentary on how our nations social system is still breaking down and our governments inability to prioritize the needs of those who are downtrodden, ill and in need of support.

To her thinking, by giving voice to mental illness, the movie goes far to erase the stigma and judgment long associated with it. Seeing the Joker slaughter people on screen was a message; a cry for help. She doesnt see it as glorifying violence for profit, but rather a call to arms for our society to wake up and do something about the rampant inequality between the haves and the have nots.

To use a real life example, she told me about a friend of hers who is suicidal. This young woman was talked into getting help despite her fears that she could not afford the cost of treatment. The medical system put her on 5 different medications and cut her loose with a bill that totaled over $2000. Now she has a large medical debt she cannot afford to pay, a potentially dangerous cocktail of medications with no oversight or support andmassiveadded stress to her already cracking mind.

In my daughters keen estimation, the system failed her friend.

The other thing she was clear on was that she did not want my pity or anyone elses. She wants us all to stop judging and stereotyping and try to understand what others think, believe and feel even if we do not ascribe to the same perspective. She sees us as mired in our beliefs and bogged down by media-adopted viewpoints. For one who has grown up in a selfie society, she believes most of us are wrapped up in ourselves and unthinkingly parrot what the media feeds us daily.

She wants to decide for herself what to believe, what to have faith in, what is right and wrong through thoughtful contemplation ofallpoints of view. Thats why so many young people are so enraptured with the word fluid today because they truly are fluid in their thinking and their actions.

Shes not interested in swaying us to her viewpoint because she doesnt have one that is set in stone. She simply wants us to seek to understand, without waiting for her to pause and take a breath, so we can rush in with our viewpoint havingnever actually listened.

The post Understanding the Movie Joker from the Viewpoint of a Millennial appeared first on The Good Men Project.