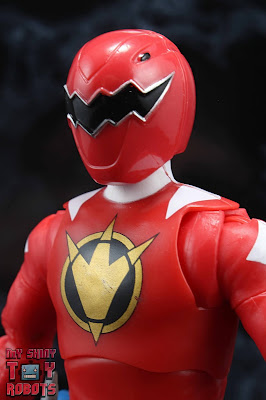 Release Date: November 2020
RRP: $19.99/£19.99
With so many different teams and characters to choose from, one of the most exciting parts of new Power Rangers Lightning Collection reveals is when something from a previously untouched (by Hasbro at least) series is announced. The line began work on Power Rangers Dino Thunder with the exclusive White Ranger figure earlier in 2020, but it was with the announcement of the main line’s seventh way that work felt properly underway with the Lightning Collection Dino Thunder Red Ranger. Soccer player and student at Reefside High School, Connor McKnight bonded with the Red Dino Gem and leads the Dino Thunder Rangers - mentored by his teacher and Power Rangers alumni Dr. Tommy Oliver. 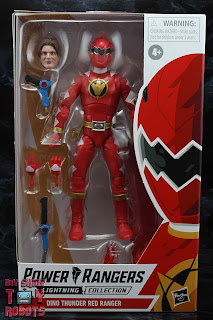 The Dino Thunder Red Ranger comes in the usual white background packaging reserved for the mainline figures, which provides a nice simple backdrop for the strong red in Tom Whalen’s character artwork to stand out. Since the Dino Thunder suits are predominantly one colour, it really makes all the details like the visor stand out all the more. This artwork is repeated on the opposite spine but continued onto the closest one, where it is also accompanied by the Power Rangers Dino Thunder series logo. On the back of the box you’ll find the usual big Hasbro render image of the figure showing off as many accessories as it can - which is fairly close to the real thing in terms of paint apps but differs in one slight way (see further below). Open the box up and you’ll find both the figure and accessories neatly laid out on a moulded plastic tray. 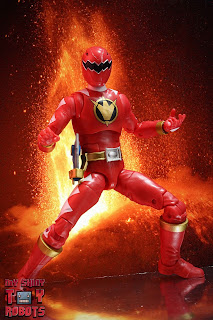 The core Dino Thunder suits are ones which are pretty light on the detailing, but the areas where they do have it are what really make it work. Other than the primarily red plastic body of Dino Thunder Red, the core detailing comes from the white diamonds running down from the shoulders to all of the limbs, as well as the team emblem in the middle of the torso. Even with the exposed red sections for the joint plugs the diamonds have been very well done, as has the chest emblem. My copy had a little bit of paint scratching as you can see from the photos, but that’s just the luck of the draw with these figures rather than a running QC issue. The more pressing paint concern on my copy anyway was the rim around the visor, which has some very sloppy application around the top centre. On the subject of that visor rim, this is the one main inaccuracy with the figure - here it’s been painted silver when it should be white. It really doesn’t affect the overall look of the figure too much, but when the box art has it right you do have to wonder why Hasbro can’t. Other bits of paint detailing come from the gold glove and boot cuffs, as well as the gold belt with silver buckle. Surprisingly, even the diamonds on the hands have been painted white. Really the only major paint omission is on the Dino Brace, which to be fair is so detailed it was never going to happen on a figure at this price point. The detailing is all there though, so customisers would definitely be able to make a good go of it. Overall it’s a pretty great looking figure, it’s just the typical sketchy quality control you’ve got to be wary of when picking up your copy. 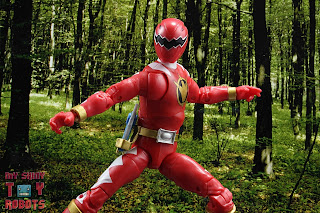 Most collectors are going to be more than used to the Lightning Collection body at this stage and what it’s capable of, but if you’re still new to the line then you’ll be pleased to know that this is another good one. Altogether the figure features;
- Ball jointed head, upper torso and hips
- Swivel hinge neck, shoulders and ankles
- Butterfly joint shoulders/pecs
- Hinged ab crunch
- Double hinged elbows and knees
- Bicep, thigh and boot swivels
That’s lots of good movement in the body to work with for a variety of poses, with plenty of tilt in those ankles to ensure the figure can stay balanced in even the wildest poses. One issue I did find with my copy is that the hand joints are quite loose (so much so that one of them even struggles to hold the weapons up properly), but it’s unclear if this is a widespread issue or if I was just unlucky. Regardless there are so many great areas of movement on these figures - the combination of butterfly and swivel hinge joints in the shoulders always proving a particular highlight. 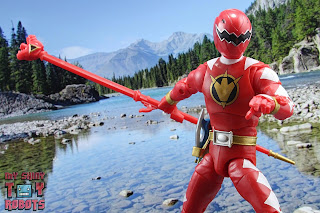 When Dino Thunder Red was first revealed (or leaked as it tends to be with Hasbro figures these days), there were some concerns about just how many accessories the figure would have - or more specifically it would include his ranger-specific Tyranno Staff. As it turns out those packaging shots are very good at hiding everything that’s in the box, and Dino Thunder Red has a pretty fantastic range of accessories overall. Along with two additional hands he also comes with the Thundermax Blaster, Thundermax Saber, Tyranno Staff and a red flame effect part designed to be used with the Thundermax Saber. In-show the Blaster and Saber were a single transforming item, however here they have been realised as two separate pieces so that they can have the correct proportions. While both pieces look great and have a decent amount of paint apps, neither is without their problems. On the suit itself when the Blaster is holstered the blade (silver) part of it hooks over the front so that it can fit into the holster correctly. Since the toy is a non-functional accessory, this doesn’t happen here so it kind of just awkwardly jams into the top of holster and sits much too high. This isn’t a huge problem in and of itself, but this is yet another team in the Lighting Collection that has holster issues (Zeo being the most significant, and SPD’s isn’t quite right either). Meanwhile the Thundermax Saber suffers from atrocious paint rub. Almost every bit of this weapon is at risk, whether it’s the hilt when placed in the figure’s hand or the blade when the effect part is attached. It’s a shame because the effect part is rather nice and (at this time) unique to the figure, but the whole process of hooking/weaving it around the blade has already caused serious paint rub on my copy. Rounding the weapons off this leaves the Tyranno Staff, which mould-wise looks fantastic but is seriously lacking when it comes to paint apps. There’s a touch of gold at either end, but there’s none of the T-Rex head detailing or any of the white diamonds running down the length of it. Seven waves into the Lightning Collection we’re at the point where missing paint apps are to be expected, but there is a really hefty amount missing here. Clearly that was the trade-off for it coming with pretty much everything it should for a base Dino Thunder Red figure, so your mileage may vary on whether it was worth it or not. 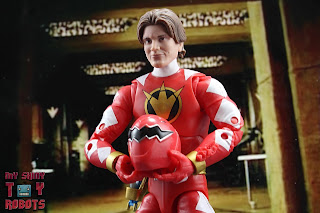 One day the Lightning Collection will be at a point where I can stop commenting on how hit or miss the alternate head sculpts included with these figures are, because Hasbro will be producing them to a consistent quality. Unfortunately this is not one of those times. In a way this alternate civilian head does bare a passing resemblance to Connor (or more precisely actor James Napier) - if he was about 15-20 years older anyway. The cheek indents from the smile, the bags under the eyes, the dimpled chin - all these features have been exaggerated to the point where the head feels more like a caricature than a photo-realistic portrait. It’s a real step down from the brilliant Trent head that was included with the Dino Thunder White Ranger. Given that there are fans out there that are so critical of these heads, it makes you wonder what the actors themselves must think of the ones that have turned out as duds. 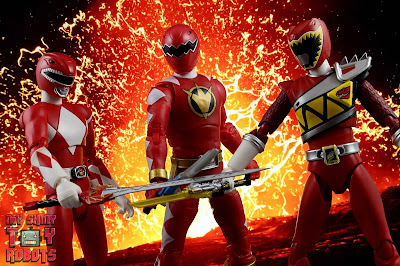 Lightning Collection Dino Thunder Red Ranger is another figure that could have been among the line’s very best, but has ended up having all these little QC problems that bring it down a notch. Okay so the terrible alternate head sculpt is a more sizeable issue, but little things like the paint cutbacks in certain places and that god forsaken paint rub are minimal problems that only become really frustrating when stacked up together. Nevertheless Dino Thunder Red is another welcome inclusion to the line with plenty to enjoy about it - especially that brilliant accessory count. It’s another all-important red ranger release, as well as us getting one step closer to completing a fan favourite team. With the Blue Ranger appearing in the following wave, hopefully it won’t be long before the Yellow and Black Rangers join them as well.