The members of the Bat Family have been cast and recast for decades. Some of the choices have been good. Some have been…really less good, and they really do make all the difference; I didn’t have any interest whatsoever in Matt Reeves’ The Batman until casting announcements started rolling in. While Pattinson will be portraying a younger caped crusader, the nth reboot of the Batverse had me thinking about who might play the various Robins in future films should opportunity arise, especially with the Ur Robin and progenitor of the legacy title, Dick Grayson, celebrating his 80th anniversary in March.

I know, he looks pretty good for 80+ especially considering he’s been fighting crime the majority of that time. I’m going to go into each Robin’s history in a separate post so rather than bore everyone by repeating myself, I’ll skip to saying, for the sake of accuracy, I’m hewing as close to current continuity as is convenient for my amusement and casting Dick as Nightwing.

Brenton Thwaites is TV’s current Nightwing and I don’t hate it but I don’t love it either. Acknowledging the trauma young Dick would have experienced as Batman’s partner, being molded into a weapon, being asked to engage in violent behavior, is important. What Titans is missing in the quest to be dark and adult, however, is the humor and energy that have always been integral to Dick as a person and which manifest in his alter ego as quippy puns and a joy, if not in violence, then in movement and in protecting the innocent.

With that in mind, I want to see I, Zombie‘s wisecracking Rahul Kohli behind the escrima sticks. I think he’s got exactly the sense of humor, timing, and compassion to pull off the best parts of Dick’s personality. Everything else can be made. Or built into the suit as necessary.

I have a T-shirt that says “Todd #2, Family Disappointment,” which is both harsh and probably more indicative of how Jason feels about himself than how anyone else in the Batfam feels about him. Except maybe Damien, but Damien is kind of a jerk. Then again, Bruce has a tendency to go foot in mouth where emotions are concerned and the guilt he carries surrounding Jason’s death and subsequent resurrection (thanks a lot, DC fans c. 1989) is still pretty potent. That said, Jason does flaunt his disregard for Batman’s number one “no guns, no killing” rule on the regular, and while his point that the Joker’s death would have saved a lot of pain isn’t out of bounds, his methods are pretty unsavory.

The Stack Newsletter
Sign up to The Stack to receive Book Riot Comic's best posts, picked for you.
Thank you for signing up! Keep an eye on your inbox.
By signing up you agree to our Terms of Service

All of that to say Jason is my favorite of the Robin title holders because I am a sucker for a fictional, problematic, troubled, obnoxious, brave, trashfire boy.

I’m am, however, of two minds on how to cast him. Jensen Ackles (who you probably know as Dean Winchester on Supernatural) voiced Jason in the animated version of Under the Red Hood (based on comics of the same name and also written by Judd Winick), did a fantastic job, and can definitely pull off a live-action Jason. In my head, though, the snarly, furious Diego Luna explaining to the unsullied idealists of the Rebellion that he’s the one who does what needs to be done for victory no matter how much he might despise it, would be absolutely perfect.

Tim is the cerebral Robin, a genius level intellect who worked out Batman and Robin’s actual identities where obsessed super villains had failed. His origin story has gone through several iterations but his intellectual abilities and fighting skills have remained constants, so we need to get us a man who can do both. Ideally, we want someone younger than Kohli and Luna for the sake of continuity, though we’re admittedly screwing with that by having all of the Robins alive, functional, and sane at the same time.

I like Shemeik Moore for Tim. If he can do teen phenom Miles Morales in Into the Spider-Verse, he should be able to ace Tim Drake and, as a dancer, shouldn’t have much of a problem learning fight choreography.

I went to fellow Rioter Jess Plummer for help casting Steph since I don’t know her as well as the others. Jess chose Auli’i Cravalho to step in as the only in-continuity female Robin/only Robin to also take up the Batgirl mantle. Steph is a lot like Cravalho’s Moana: brave, determined, and ready to step up and face danger even when it isn’t in her own best interests. I also very distinctly remember Cravalho continuing to perform without missing a beat during the Oscars the year Moana was nominated after someone whacked her in the head with a flag, which suggests she can 100% handle the vagaries of a superhero set.

Also, with Cravalho, Moore, and Luna lined up, someone can definitely hallucinate a musical number under the influence of fear gas or Joker venom or whatever. 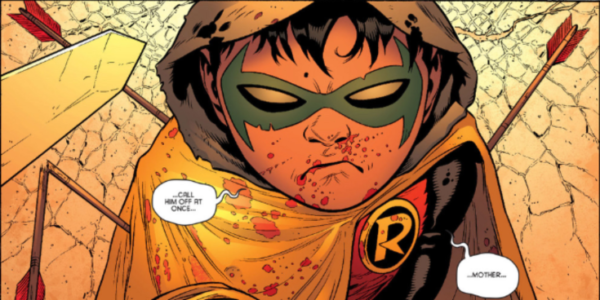 Damian Wayne, son of Bruce and Talia al’Ghul, grandson of the Demon’s Head, was a eugenics project grown in an artificial womb and dropped off with Wayne as an angry, vicious tween trained to kill to be raised by a man who refuses to take a life. It goes, in the beginning, about as well as you’d imagine.

Finding an 11- or 12-year-old to play Damian is a tall order and may not be the best thing for the character who is far more complex than many readers realize. His place in the BatFam depends on the conflict between his two natures: the made assassin and the child, the confident al’Ghul and the Wayne desperate for approval, which a person needs to have lived a little life to reality understand. The actor also needs to have the range to interact with his “siblings” in a variety of ways: Damian is constantly at odds with Tim and Jason though he has disavowed soft spot for Dick. His interactions with Bruce are all over the emotional map and we need to believe they’re all equally genuine and valid. Asher Angel who played Billy Batson in Shazam! is seventeen, which is older than I’d ideally prefer, but he’d absolutely kill Damian and it will probably work given we’re pushing Dick and Jason into their mid 30s and early 40s and Tim and Steph into their early to mid 20s.

Listen, if we’re going to have a new Batman, we may as well go all the way and have the whole BatFam. They’re dysfunctional and spend half their time trying to kill one another instead of the bad guys but really, who are we to cast aspersions? Done properly, the BatFam is one of the weirdest,  wildest, and forgiving found families around, even they do make it their business to never forget. No matter what, they always have one another’s back. Unless Jason or Damien has decided to stick a knife in it.