I greatly enjoy turning my dreams into drawings that I enliven with oil pastels, gel crayons or watercolors. Sometimes, however, I am content with a pencil drawing, especially when, playing dream detective, I call in my inner sketch artist. Here's an example from my journal from exactly one year ago: 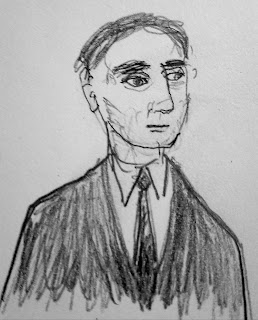 January 31, 2021
Dream
The Actor with Thick Eyebrows
Sometimes playing dream detective requires me to try my hand as a sketch artist as I seek to identify a character in the story. Last night's dream inverted a familiar dream trope. You have dreamed of being with a film star, right? Afterwards (on the assumption that you are unlikely to meet this person in regular life) you may think about what aspect of you, or perhaps another person, you have tagged with the characteristics or role you associate with that actor.
In this dream, things worked the other way round. I thought I was dealing with a senior British politician, then realized that he was an actor playing that role in an actual movie production. I recognized the actor from movies and TV series I have seen in the past. On waking, I couldn't recall his name. His most notable feature is his thick dark eyebrows. He may be 45 or 50 in the dream, good-looking in a craggy way, dark haired, fairly athletic under his custom suit.
I posted my sketch on Facebook like a WANTED notice. Scores of attempted identifications poured in. The suggested actors nearest in looks to The Man with Thick Eyebrows were Colin Farrell and Clive Owen. Not there yet, though.
Funny how this game is the opposite of what we usually play with a dream of a movie star or other celebrity. Usually we retain the name of the star and then have to figure out how the character or roles of that well-known figure might relate to us or someone in our ambit. In other words, we assume that our dream editor has stamped a well-known name or mask on a less-recognized person or personality aspect so we have something to hold from the dream.
Here it's the other way round: go find the star whose name is withheld. I have not quite caught his likeness here. I think he is British and may have appeared in political thrillers and cop stories. I haven't come up with a name yet though it's interesting what happens when you ask Auntie Google to pull up mug shots of Male Actors with Thick Eyebrows.
Going to Movie Previews in Dreams
A year later, I still haven't found a satisfactory match for my drawing. However, now I am watching more movies on the small screen under the combined effects of the pandemic and a bitter Northern winter, maybe his face will appear. In the past, I made a collection of movie previews I attended in my dreams. The fact that we can dream the content of a film we haven't yet seen or thought about is for me entertaining confirmation that we may dream the future all the time. Here is one of my favorite examples, from 1996:

I dream that a silly little dog decked out in fake antlers runs out onto a road and is killed. He is magically revived by a bizarre character who does not conform to human norms.

I had no strong feelings about the dream. It felt like watching a movie. I entered the report in my journal and rushed to the airport to catch an early flight. I missed my connection and ended up on a different plane with a completely different itinerary. I was carrying a copy of my book Conscious Dreaming, then newly published, and the woman author seated beside me asked to see it. With our pleasant conversation on hold, I looked up at the screen where the in-flight movie was playing. I watched a silly little dog decked out in fake antlers for a Christmas pageant run out on a road. He was killed but magically revived by a bizarre character, the archangel Michael portrayed by John Travolta in the movie of the same name.