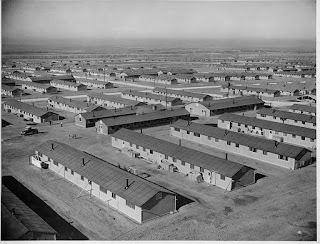 Tomorrow is Christmas. For the majority of us, it is the second one within the confines of a relocation center. It's different from those Christmases we enjoyed back in the state of sunshine. Somehow, the true meaning of the spirit of Christmas are lacking. We are often blinded because we no longer have the opportunity to attend those gala Christmas eve parties; because we are no longer able to receive or give Christmas gifts in abundance: because we are no longer able to enjoy the small things that go with Christmas time. But if that's our true conception of a "White Christmas," we have yet to learn and receive the real rewards that go with the true Christmas spirit — especially in our family groups.
No matter where we are, no matter what adverse conditions we encounter, we can and must enjoy a certain degree of Christmas spirit. Remember when Charles Dickens wrote one must be a misanthrope if he didn't have some sort of pleasant associations aroused at the thought of Christmas time? It is worth a thought or two.
From the Granada Pioneer (Amache, Colo.), December 24, 1943, (Christmas EDITION)

By Rob Carrigan, robcarrigan1@gmail.com
Following the Japanese attack on Pearl Harbor on December 7, 1941, President Franklin D. Roosevelt authorized the forced relocation of Japanese Americans living on the West Coast with Executive Order 9066. In the spring of 1942, some 120,000 Japanese Americans were "evacuated" and placed into temporary "assembly centers" before being transferred to more permanent and isolated "relocation centers" like Granada, Colo., or Amache, as it was known to those forced to live there.

Run by the War Relocation Authority, the government body responsible for administration of the incarceration program, Granada was one of ten such camps, the only one to be built on private land. The camp site covered 10,000 acres , of which only 640 acres  was used for residential, community and administrative buildings. The remaining land was used in agricultural projects. The land was owned by several ranchers and farmers before the war, and only one of these property owners willingly sold his acreage to make way for the camp, creating tension between the WRA and the other landholders, whose parcels were taken via condemnation.
However, this did not necessarily translate to overall resistance to Japanese Americans being housed in the area: Colorado Governor Ralph Lawrence Carr was one of the few to welcome the Japanese Americans and the only governor not to oppose the establishment of a WRA camp in his state, going against the anti-Japanese sentiment of the times.

While Colorado Governor Ralph Carr's campaign policies were aimed at dismantling the expensive bureaucracy of the New Deal, Carr still supported Roosevelt's foreign policy and favored American entrance into World War II after the Japanese bombed Pearl Harbor on December 7, 1941. The war with Japan initiated a chain of events that bred discrimination and intolerance toward Japanese-Americans.

In 1942 an estimated 120,000 Japanese-Americans were stripped of their property and possessions. These displaced citizens were resettled in land-locked states by the War Relocation Authority so that the supposed "yellow peril" could be contained. The question on many Coloradans' minds was not whether American citizens of Japanese decent should be stripped of their rights and put in internment camps, but where the camps should be. The overwhelming opinion of the populace was typified by a series of highway billboards proclaiming, "Japs keep going."

In other states, the Governors took aggressive stances against allowing relocation camps in their States.The Governor of Wyoming at the time went as far as saying:“There will be Japs hanging from every pine tree.” If the Federal Government tried to relocate West Coast Japanese Americans there.
One of the few voices of reason during wartime was Governor Carr, who continued to treat the Japanese-Americans with respect and sought to help them keep their American citizenship. He sacrificed his political career to bravely confront the often-dark side of human nature.
At one time, the New York Times consider Carr as being on the path to become president of the United States.
"If you harm them, you must harm me. I was brought up in a small town where I knew the shame and dishonor of race hatred. I grew to despise it because it threatened the happiness of you and you and you." Carr's selfless devotion to all Americans, while destroying his hopes for a senate seat, did in the end become extolled as, "a small voice but a strong voice."
Also in the same edition of the Granada Pioneer (Amache, Colo.),
December 24, 1943, (Christmas EDITION)
But we, who remain behind the barbed wire fences, must remember that each passing day will make it more and more difficult return to the towering skyscrapers, broad boulevards or to a farm in a green valley.
Even now as I write this message, there are are evacuees with suit-cases in hand and holding overcoats boarding pullmans, leaving the drab conditions, suffocating dust, shivering cold and sweltering heat that go with any relocation center.
As we hear that popular song, "I am dreaming of White Christmas," let's remember to make that dream
a reality. Our dreams of returning to America's life stream, are dreams of all minority groups. In this we can find hope and renewed strength for the difficult task which lies ahead.
As we celebrate our second Christmas tomorrow, we hope another Christmas dawns. The majority of the 100,000 remaining evacuees will see and observe "with peace on earth, good will toward men" from outside the center gates.
__ from Editor, Sueo Sako 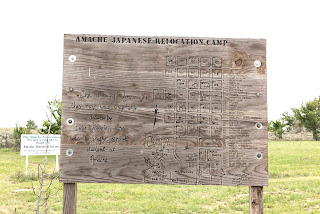 An etched wooden sign "Amache Japanese Relocation Camp," complete with outlines of buildings, one of the only remnants, save for a few cement foundations a little nearby graveyard, of the Amache Camp, where Japanese and Japanese-Americans were interned during World War II, near the town of Granada in Prowers County, Colorado. 2015, Carol M. Highsmith, photographer.