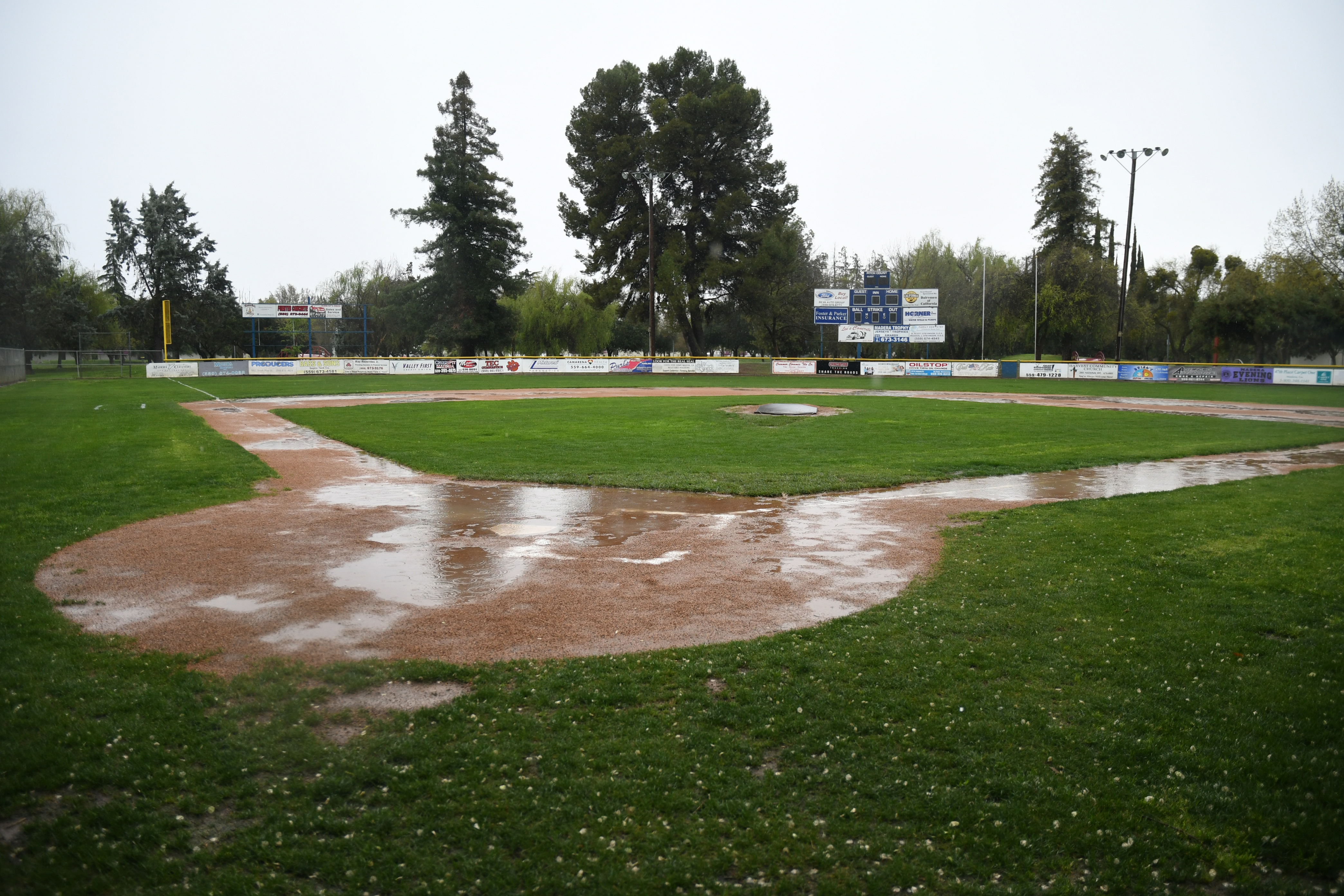 Wendy Alexander/The Madera Tribune
Although the fields were wet, Madera Unified School District facilities, including Eddie Chapa Field at Madera South, were already locked out due to the COVID-19 outbreak.
When the big chips started to fall, the rest fell in suit when it came to athletics in Madera.
Thursday afternoon, it was almost like business as usual. Madera South was hosting its annual softball tournament, the boys volleyball team and boys tennis teams at Madera were getting out of school to play their matches.
However, a couple of hours later, they were told they weren’t going to play their games/matches that day. A couple more hours later, they were, basically, told to go home for a month.
“It’s unprecedented times,” said Marty Bitter, Madera Unified School District’s Director of Athletics. “I have a hard time wrapping my head around what we’re going through right now.”
By Friday, the entire district was shut down until April 14, at the earliest, including athletics.
“It hooks up with Spring break and it gives us enough time to reevaluate,” Bitter said. “If we are able, we have to go back into preseason mode where we have about 10 days of practice to get our kids out and acclimated. We would resume the spring sport season and include what we have up to this point. You try to make as many games as you can in the allotted time. In baseball, you play doubleheaders. In volleyball, maybe you have a league tournament where you can play multiple games in one or two days.”
However, Bitter knows that these initial plans can change with the ever-changing world dealing with COVID-19.
“It’s been extremely hard over the last five days to really make any decisions that it’s such a fluid situation that any decision you make, 15 minutes later it’s an obsolete decision,” Bitter said. “At one point, we said there would be no games until April 13, but you could practice. Two hours later, we can’t even practice.”
In addition to the Madera Unified School District athletic teams not being able to practice and play, but so are other entities that utilize MUSD facilities.
“Every team is, basically, locked out,” Bitter said. “Everybody is on their own. We have no district facilities available, not only to our own teams, but to outside entities who were allowed to use our facilities like Babe Ruth or AAU basketball.”
Bitter also realizes that this hurts teams and athletes who have put their heart and soul into this year and are having to wonder if they will play again this season.
“This hurts all of us,” Bitter said. “Our hearts are broken. These kids have put in so much time and energy into their sports. When you have these entities ending or postponing their season, it’s hard to justify playing a high school game.”
Postponing the season at the high school level is just one layer to the overall situation, Bitter says. He says there are more branches out there to just postponing or canceling a season and he cites the NCAA as an example.
“I think about the NCAA granting the seniors another year of eligibility,” he said. “What happens to the kids they recruited in? What happens to the junior sitting behind the senior and they were going to be the guy next year? There’s just so many things to think about. What’s going to happen to SAT scores? Are kids getting into college next year? Who knows?”
Despite the grumbles and wonders out there, Bitter and the rest of the district are doing this with the safety and health of its students at the forefront.
“We go out and say that the health and safety of our student/athletes is of utmost importance,” he said. “That’s why we have rules at games and spectators to behave is to keep our athletes safe. For us to air in any other way would not be practicing what we’re preaching.
“I heard one radio sports guys say the other day that it’s better to get two weeks or a month into this and realize we overreacted than getting a month into this and realizing we should have done something.”
List of athletic events postponed
• All Madera Coyote athletics
• All Madera South Stallion athletics
• All Liberty Hawk athletics
• All Chowchilla Tribe athletics
• Madera National Little League opening day (tentatively rescheduled for April 25)
• Madera American Little League regular season
• Madera Speedway opening day
• Liberty High School Athletics Golf Tournament (rescheduled for May 9)
• Madera Babe Ruth tryouts (Registration still occurring)

The One Document Americans Need Now: Power of Attorney
March 31, 2020

In the current era, where most of our correspondence is digital, it makes sense that cards have also made the jump online
March 30, 2020