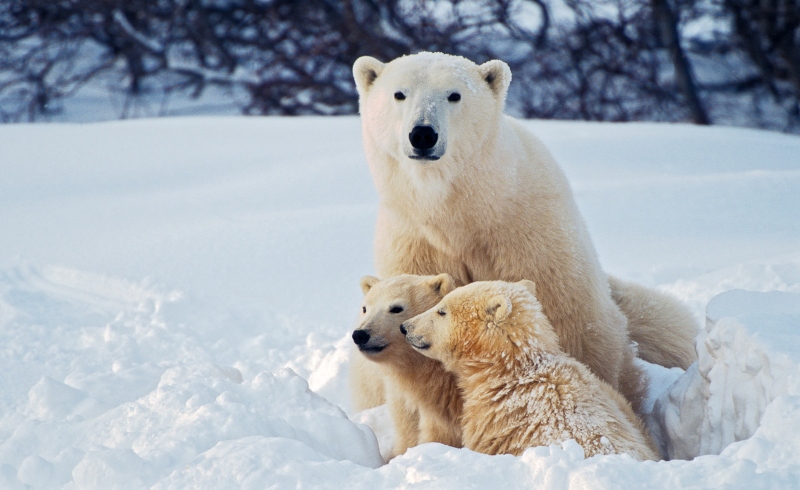 By Steve Blackledge and Dyani Chapman

Americans love their polar bears. The largest land carnivores in the world, these massive, powerful beasts are fierce, fearless and very much threatened. It’s the threatened aspect of their story that makes our hearts go out to them, especially as they struggle to survive in a rapidly warming arctic.

The Southern Beaufort Sea population of polar bears is estimated at approximately 900. While these wild, fluffy creatures often make their dens in the coastal plain of the Arctic National Wildlife Refuge, they roam far and wide throughout the north coasts of Alaska and Canada.

That’s why, earlier this month, conservation groups took the courts against U.S. Fish & Wildlife Service to challenge a regulation that would allow oil and gas operators to harass, harm and potentially kill polar bears on land and sea in Arctic Alaska. At the center of the battle is a question: should oil and gas companies be allowed to explore and extract oil in the polar bear’s natural habitat? For anyone who cares about the fate of polar bears, that answer is no.

Political and legal fights surrounding polar bears are nothing new. Twenty-six years ago, Congress passed a budget that opened the coastal plain of the Arctic Refuge to drilling. Former President Bill Clinton vetoed it. Later in 2017, Congress once again passed a budget bill that sought to open the coastal plain to industrial oil drilling. This time around, it was signed by former President Donald Trump.

Trump’s signature in 2017 kicked off a fight that continues today. As the Trump administration plunged into a mad drive to conduct an oil and gas lease sale, the native Gwich’in people and conservation groups (including Environment America) sued, calling it a slapdash plan that didn’t adequately protect wildlife, particularly the Southern Beaufort Sea polar bears. Later, when President Biden took office, he paused the leasing program. Today, that plan lies in limbo.

Suppose we want our children and grandchildren to have the opportunity to fall in love with wild polar bears, delighting in the playful follies of cubs and marveling at the ferocious fury of their hunt. In that case, our generation must do everything we can to protect their native habitat — wherever it may fall.

Trustees for Alaska attorney Bridget Psarianos argues that the regulation that allows oil drilling operations to harm polar bears “absolutely and clearly defies the Marine Mammal Protection Act and violates multiple other laws by allowing the harassment of nearly half of the population of these already threatened polar bears.”

The suit against the Biden administration’s Fish & Wildlife Service aims to protect polar bears living throughout Arctic Alaska. Some may argue that protections outside a wildlife refuge are less important, but this argument is pure folly. These are the very same bears that also live in the refuge. Furthermore, legally, this distinction does not matter: The laws that protect polar bears from extinction apply anywhere and everywhere the polar bear roams, whether in a conservation paradise, State of Alaska lands, public lands managed by Bureau of Land Management, or an oil field.

The lawsuit, brought by the law firm Trustees for Alaska, was on behalf of seven groups and represents five clients in the case: the Alaska Wildlife Alliance, Alaska Wilderness League, Defenders of Wildlife, Environment America, and the Sierra Club, which also represents itself. Trustees is co-counseling with the Center for Biological Diversity, which represents itself and Friends of the Earth.

We hope the courts will examine the facts on the ground and force the government back to the drawing board, leading to a regulation that’s far less threatening and much more protective of the polar bear. What lies ahead in the polar bear’s future is uncertain; it’s time the courts take a stand to ensure their long-term survival.

This post was previously published on news.mongabay.com and under a Creative Commons license CC BY-ND 4.0.

If you believe in the work we are doing here at The Good Men Project and want a deeper connection with our community, please join us as a Premium Member today.

Premium Members get to view The Good Men Project with NO ADS. Need more info? A complete list of benefits is here.