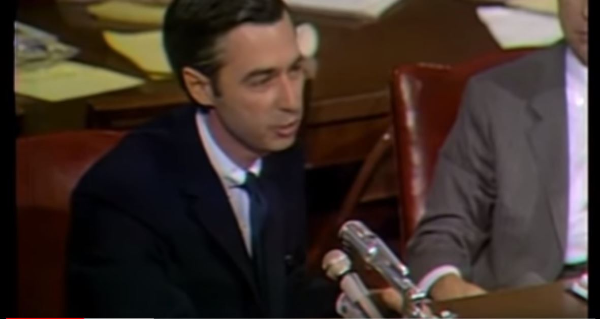 Whoooo boy. I havent strung someone up on the wheel of peasants in a while. But its time.

Lets take you back to May 1, 1969. That afternoon a man was brought to testify before the US Senate. He was brought in to testify that the funding for the Public Broadcasting System shouldnt be drastically cut.

1969 was the first year of the Nixon Presidential Administration. The war in Vietnam was raging halfway across the world. And the United States one could argue was at war with itself.

The witness who was called was a slightly built man in a conservative suit. He spoke with the patience and compassion of a man of deep faith. And he squared off against a feisty New England senator who was full of bluster and vitriol against PBS and was one of the leading proponents of cutting their funding.

Rhode Island senator John Pastore was the chairman of the Senate Subcommittee on Communications. And the witness he called to testify was the creator and host of an upstart childrens TV show named Fred Rogers.

I detailed my admiration of Mr. Rogers in this article from the summer of 2018 after the documentary came out about his life. I highly encourage you to read this piece.

But Im called to write this piece because its time to string someone up on the wheel of peasants. I havent done this in a while.

As of this writing, I havent had the opportunity to see A Beautiful Day in the Neighborhood the film about Mr. Rogers starring Tom Hanks. And I absolutely will.

With the publicity of the new film, Mr. Rogers has been in the news a little more. And one commentatorif you can call him thathas seen fit to say one of the most absurd and peasant-like things anyone has ever said about the American icon.

Fred Rogers modeled decency and Christian values which is great. But he also modeled a misguided form of Christian manhood that looked so much like metrosexual wimpiness, its really difficult to tell the difference.

That was a quote from a man named Andrew Klavan. Klavan is an author and political pundit on a website called the Daily Wire. And this quote gets better.

Klavan adds, if you really want to have a beautiful day in the neighborhood, call John Wayne. Tell him to bring his guns.

This commentary was in a segment of his show apparently called The Future is Male. {insert eye roll emoji here}.

Lets take a sample size of 1000 adults. Out of those thousand people, some 504 of them will be men. These wont all be good, healthy, emotionally literate men. But by the legal definition, theyre all men.

Out of those 504 men, guess how many ways there will be to be a man.

Would you believe there are 504 different ways to be men!

Now multiply that to the worlds population of menand do you get my point?

Fred Rogers was more man than any three of us. He dared to produce a childrens TV show on a shoestring budget using puppets, stark settings, and simple lighting setups. And he managed to create to my mind the single most important TV show for childrenyknowEVER. Tackling really challenging topics such as racism, assassination, and divorce with an intelligence never before seen or seen since.

Oh, and have I mentioned that Mr. Rogers didnt make his show in Los Angeles or New York. He produced his show in a small studio in Pittsburgh hardly the entertainment capital of the east coast.

On that May in 1969 when Mr. Rogers was called to testify to Senator Pastores committee, he brought a prepared statement which by his estimate wouldve taken about 10 minutes to read. Instead he chose to speak from the heart for the subsequent six minutes. And his eloquence and authenticity ended up getting him and his network what they needed.

Klavan added that he admired the way that Jesus managed to be a man of unwavering integrity who was willing to die for what he believed in.

Mr. Klavan, if you dont believe that Fred Rogers was a man of unwavering integrity who was willing to sacrifice for what he believed in, I dont know what Jesus you read about.

There are as many ways to be a man as there are men. What John Wayne and his guns had to do with this, Ill never know.

Lets take Dr. Martin Luther King Jr., Malcom X, and Mahatma Gandhi. Those were three men who were outspoken about what they believed and ended up getting assassinated for their troubles. Character issues have come out about all three men, but most choose to remember what they stood for.

Your hero John Wayne saw his fair share of controversy in his life and times. Lets not forget this.

Would you argue that they werent men? They were showing some sort of metrosexual ideal.

Fred Rogers has taught more little boys and little girls what being a kind, compassionate, and gentle man is all about than youll ever know.

While there are as manty ways to be a man as there are men, it all starts and ends with that muscle that beats inside your chest. If youre not being true to whats authentically in your heart, then youre not being a man.

And I can safely say this: Andrew Klavan you are a peasant.

Sign up for our Writing Prompts email to receive writing inspiration in your inbox twice per week.

The post Breaking News: Are We Really Talking About Mr. Rogers Manhood? appeared first on The Good Men Project.