A few simple ingredients and a grill transform a run-of-the-mill chicken breast into our wildly flavorful Asian Marinated Chicken. Lime juice, honey, fish sauce, soy sauce, and honey are the ensemble of ingredients making up the ultra flavorful marinade the chicken is immersed in before it’s thrown on the grill. What results is a slightly charred on the outside, moist on the inside chicken breast that’s worthy of the most glorious summer weekend. We serve the juicy chicken with an easy Snap Pea Panzanella and then relish in the fact that this easy dinner took virtually no effort to put together. 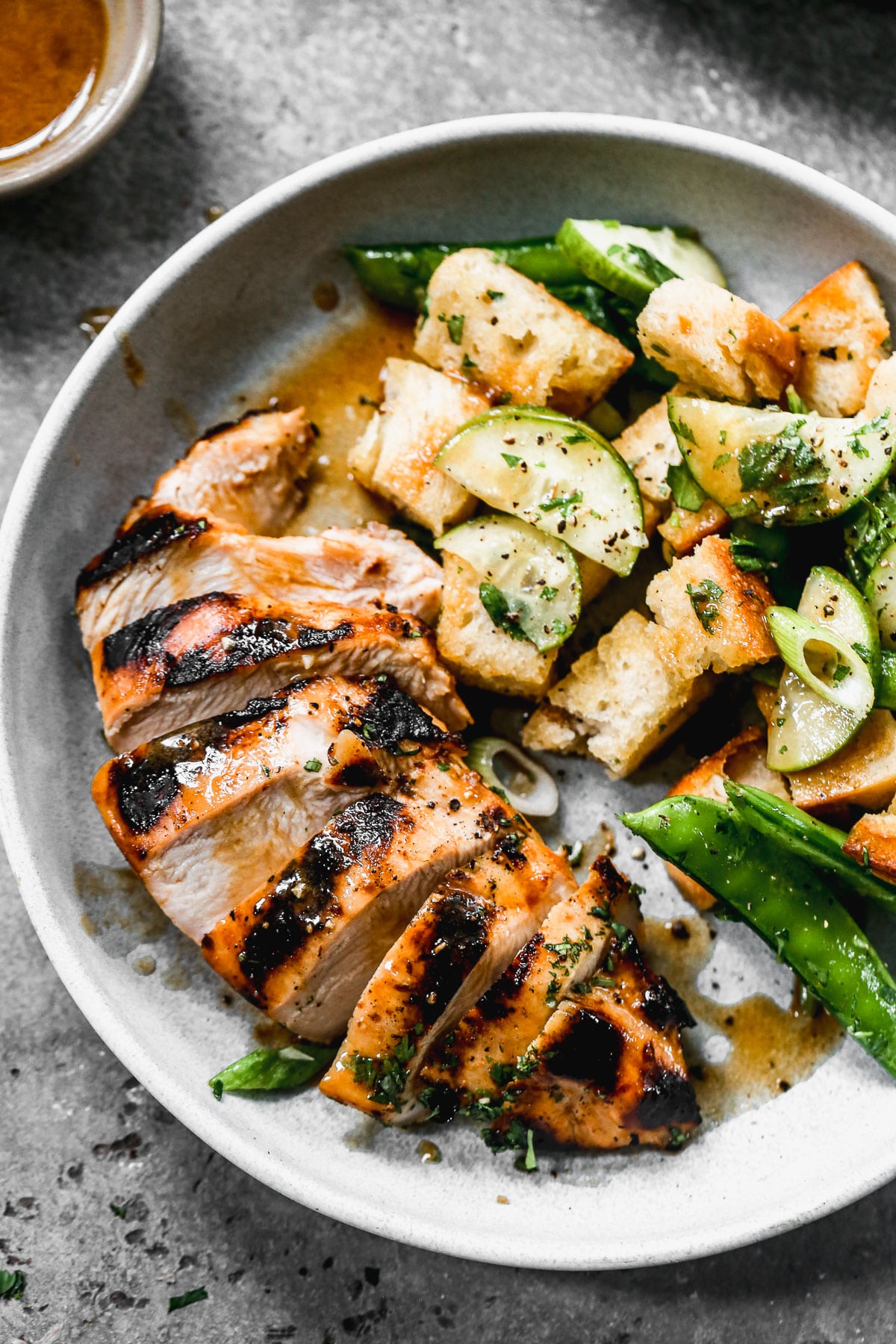 It’s quite remarkable to see how five simple ingredients can transform a simple chicken breast. After a quick meet-up with the grill, our Asian Marinated Chicken takes a once blank one-note canvas and produces a flavorful, juicy healthy protein you’ll have no problem eating on repeat.

We take an equal combination of briny fish sauce, citrusy lime juice, sweet honey, and nutty sesame oil and let the chicken marinate until the sweet, sour, and salty notes permeate the core of the chicken, then throw it on a screaming hot grill until it’s charred on the outside and moist and tender on the inside.

Even better? We serve it over an Asian-inspried summery panzanella studded with vibrant crunchy snap peas and cilantro. It’s the perfect all-in-one meal and the perfect way to change up your chicken and grilling game this summer. 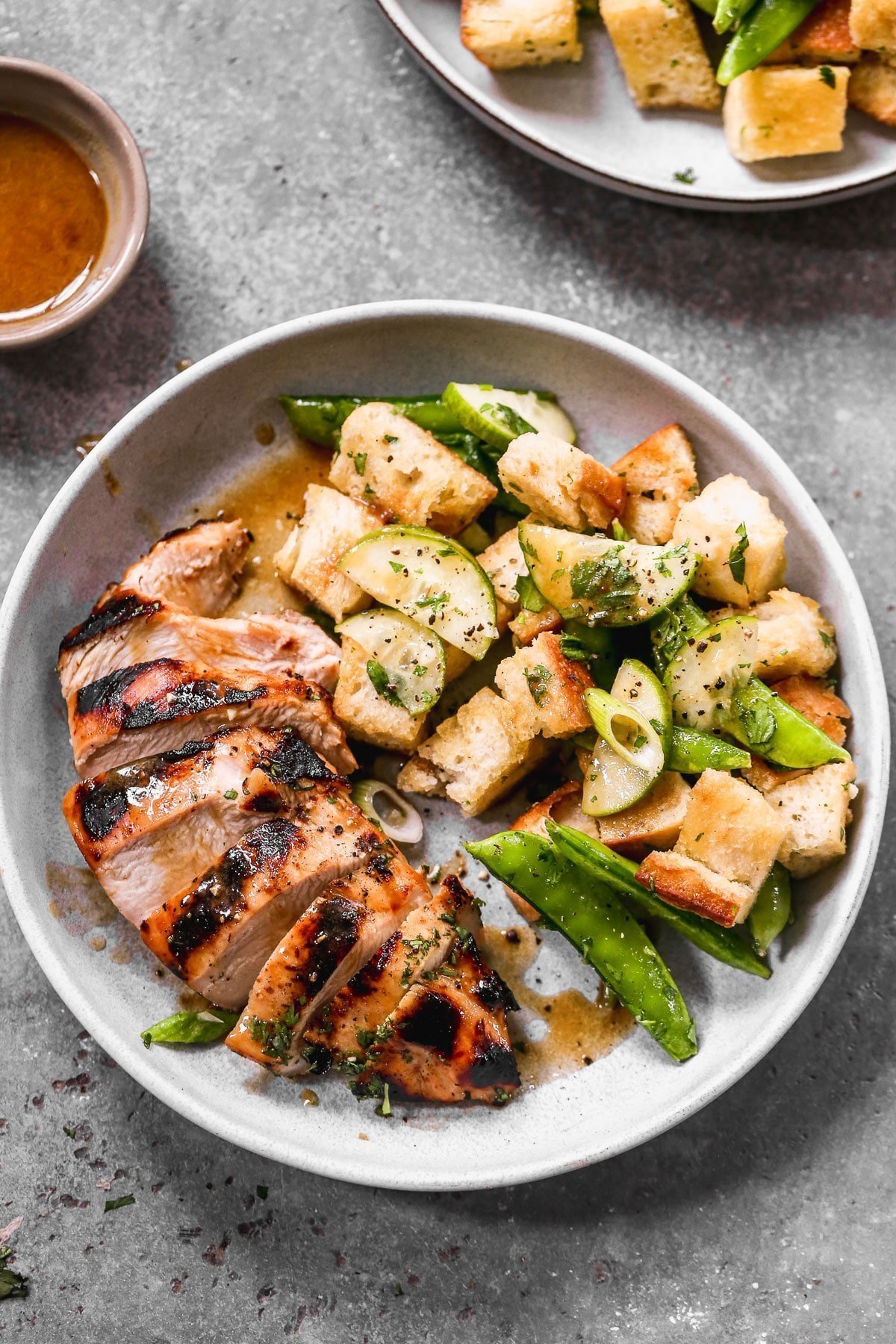 Chicken. I like to look for smaller organic chicken breasts. Make sure they’re similar in size. Also, if they are much thicker on one side than the other, use a rolling pin or meat mallet to make them relatively even in size. This will help them to cook evenly on the grill.

Fish sauce. Fish sauce is not for everyone. It has a very briny umami-like flavor, but can be very strong. I don’t usually care for it in large doses, but here it’s balanced out really nicely from the lime juice and honey. If you’re still weary, start off with the half the amount I call for and add more in to suit your taste.

Limes. Fresh lime juice is key! I also like to zest the lime first and add the to the marinate for an extra lime essence.

Sweetener. I like to use honey here, but agave, maple syrup, or brown sugar will also work great.

Sesame oil. I love the slight nuttiness sesame oil adds to this. Use as much or as little as you’d like.

Soy sauce. This is where our saltiness comes in. Use regular or low-sodium. 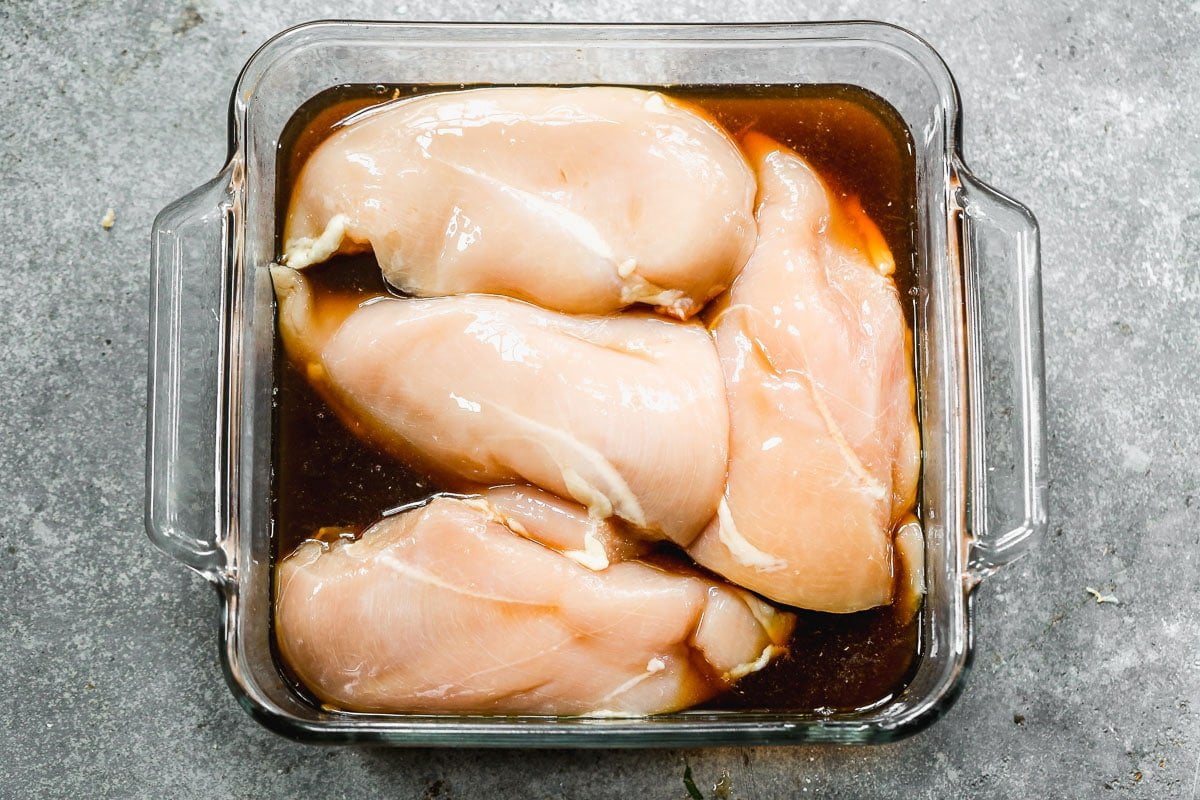 Bread. I like to use an artisan sourdough, but any sturdy good-quality bread will work. Usually you want to use day-old bread for panzanella, but I often buy fresh and dry it out on a low temperature in the oven.

Snap peas. I love the crunch and vibrant green color of snap peas. We leave some whole and slice some so they tender peas cascade out.

Cucumbers. Texture is the name of the game in our panzanella and we stay in line with crisp cucumbers. Try to grab an English cucumber. Their skin is thin and there are no seeds to be found.

Cilantro. Lots of it! I go heavy on the cilantro here, I think it compliments the chicken really nicely. Use as much or as little as you’d like.

Dressing. We mimic the same ingredients in the Asian marinated chicken in the dressing. Sesame oil, lime juice, and honey are the only ingredients you’ll need. And plenty of salt and pepper. 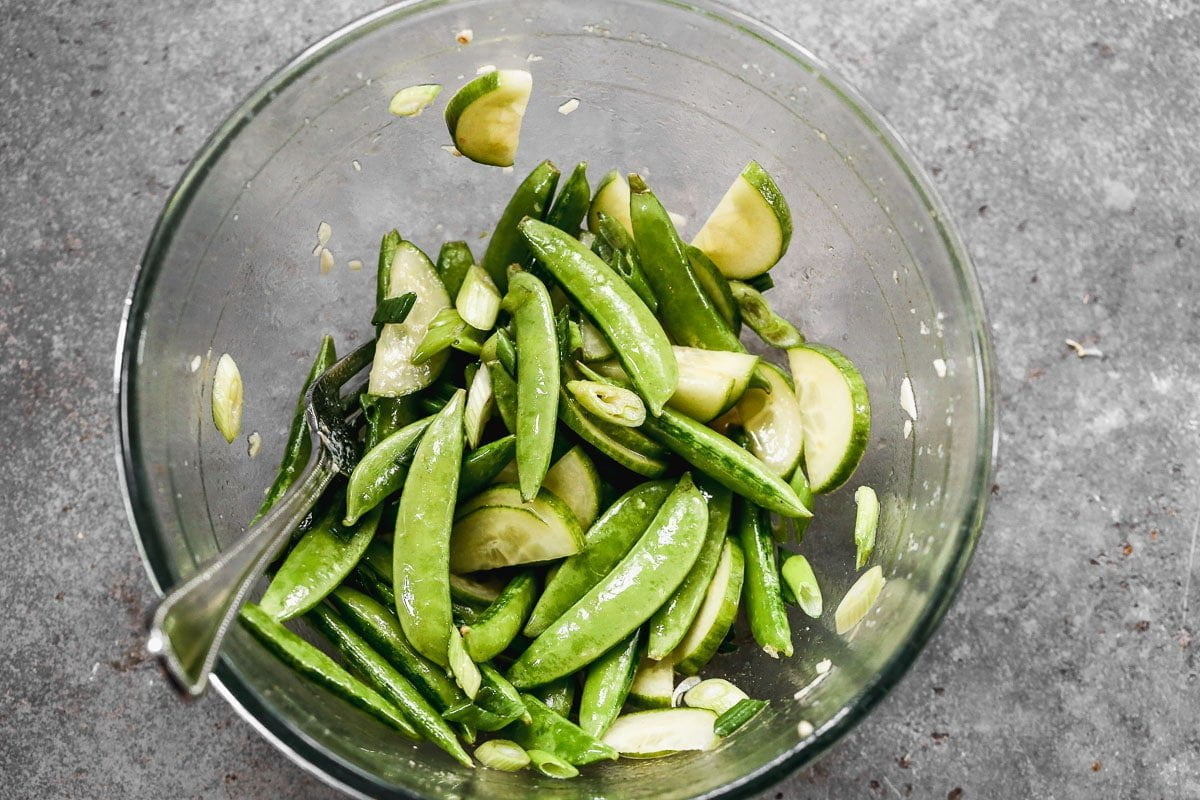 Pound out the chicken. If your chicken breasts aren’t even, use a meat mallet to thin them out until they are even in thickness.

Prep the grill. Make sure your grill is clean. Preheat to medium high or 400 degrees. Gently oil the grates with a neutral oil such as canola oil. 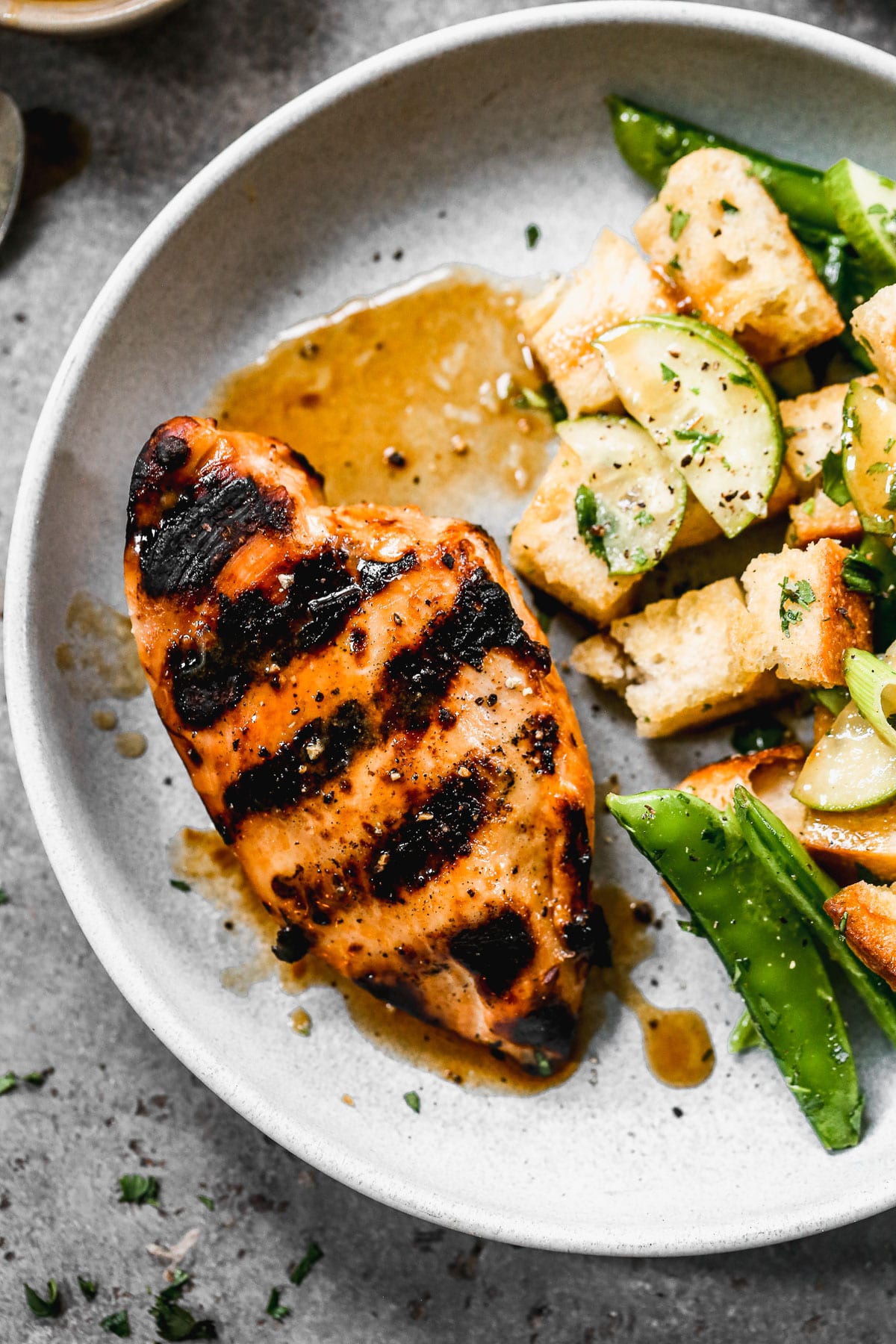 Make the bread cubes. While the chicken marinates, use this time to assemble the components of the slight. Slice hearty bread into 1-inch cubes. Toss with a little olive oil, ground ginger, garlic, salt and pepper. Spread on a baking sheet and toast until crisp.

Make the dressing. Add lime juice, ginger, and honey to a small bowl. Whisk in sesame oil. Season to taste with salt and pepper.

Toss. Add the veggies to the bread. Drizzle with dressing and toss. Season with salt and pepper.

Slice the chicken and serve with the panzanella salad. 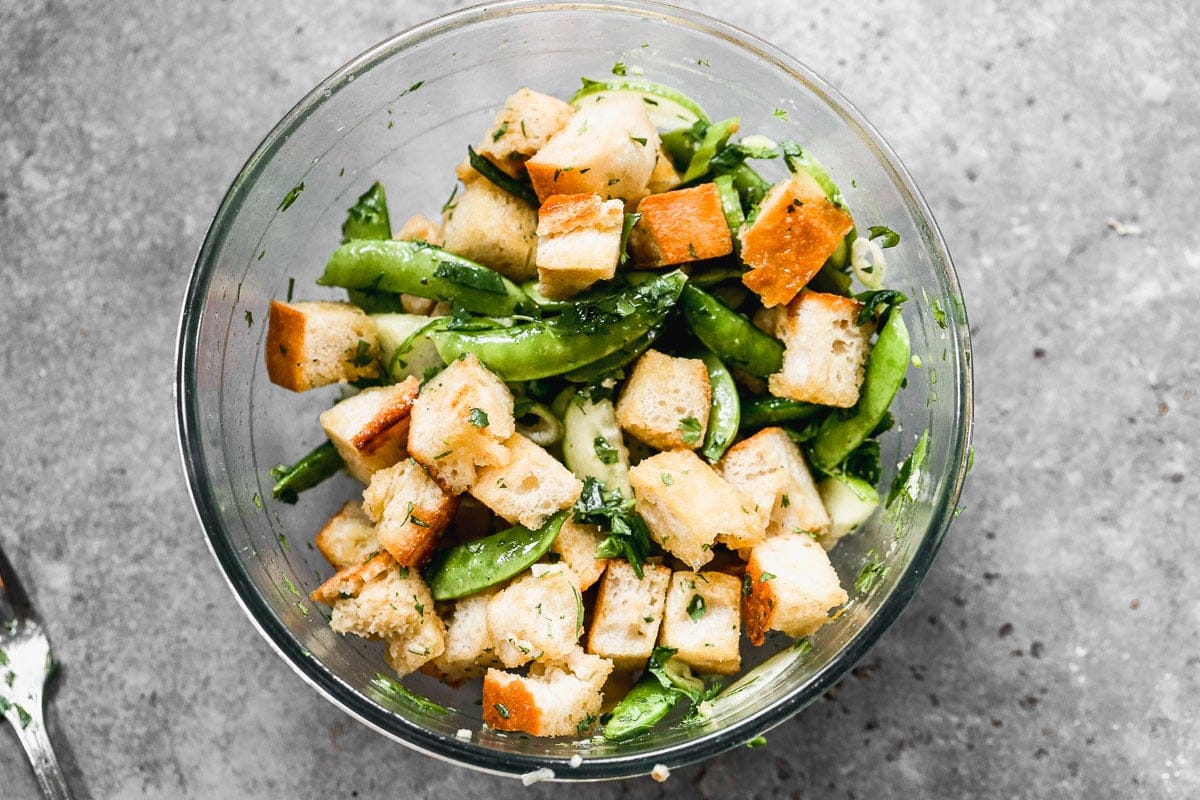 Can I make this in advance?

You can prep many of the components a day in advance. Toast the bread. Slice the cucumber. Make the dressing and make the marinade.

Because there is a significant amount of lime juice in the marinade, I wouldn’t recommend marinating it longer than eight hours. But this means you can marinate in the morning and grill in the evening.

Substitutions and Tips and Tricks for Recipe Success 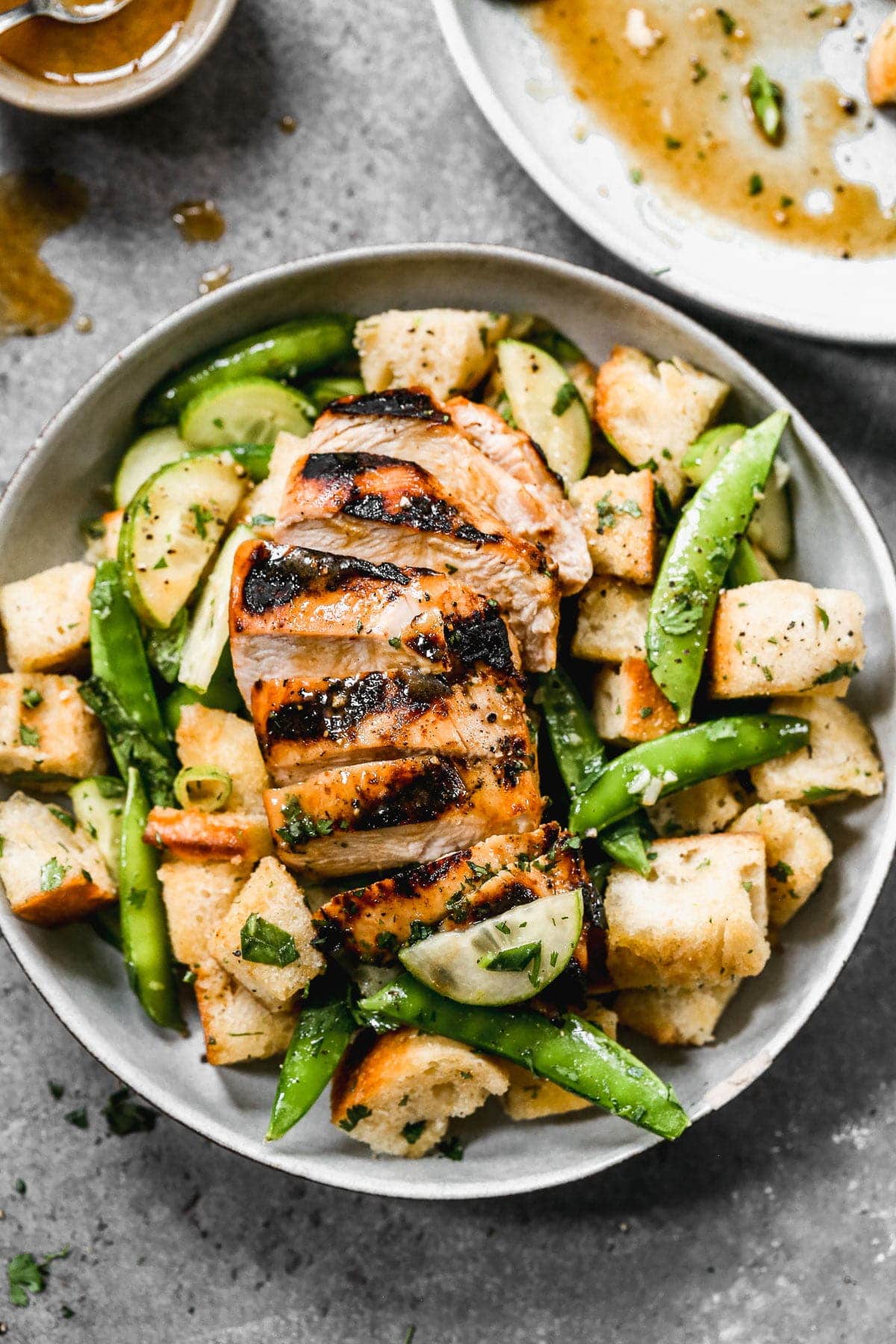 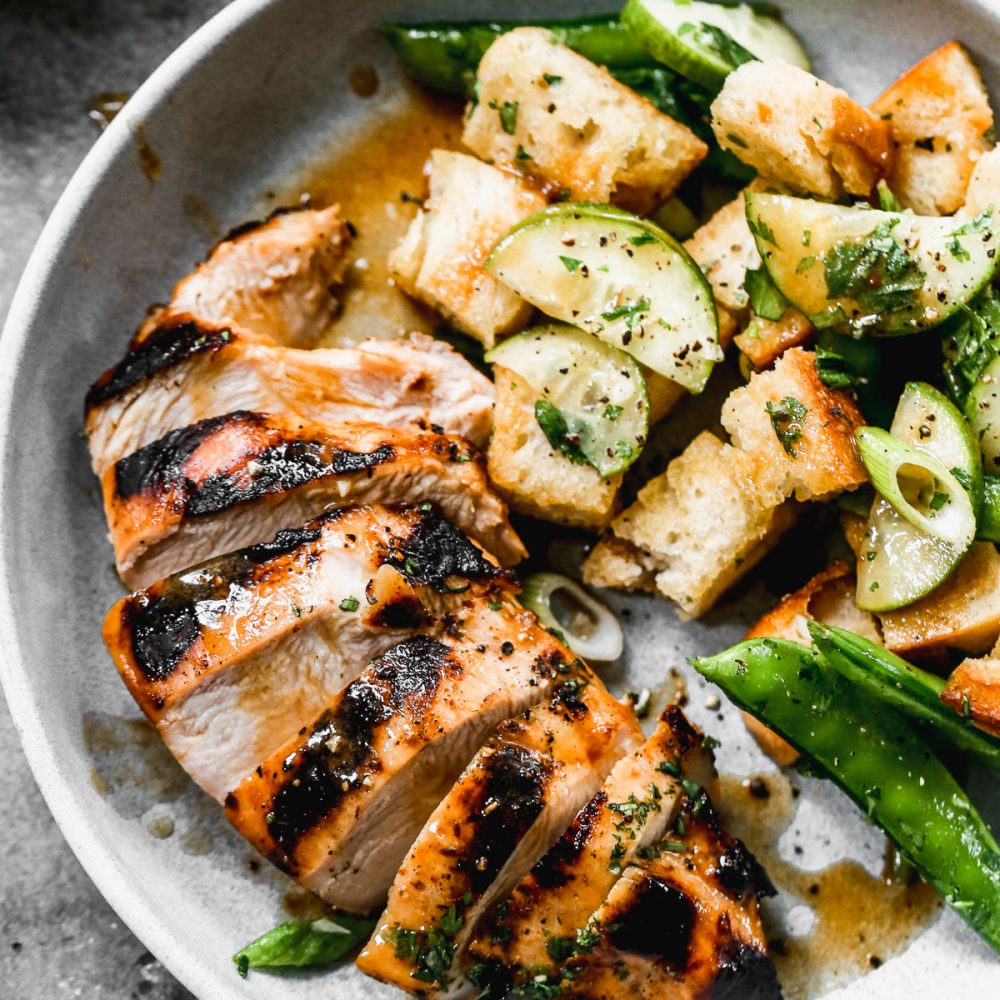 A few simple ingredients and a grill transform a run-of-the-mill chicken breast into our wildly flavorful Asian Marinated Chicken. Lime juice, honey, fish sauce, soy sauce, and honey are the ensemble of ingredients making up the ultra flavorful marinade the chicken is immersed in before it's thrown on the grill. What results is a slightly charred on the outside, moist on the inside chicken breast that's worthy of the most glorious summer weekend. We serve the juicy chicken with an easy Snap Pea Panzanella and then relish in the fact that this easy dinner took virtually no effort to put together.
Course Main Course
Cuisine Asian
Keyword asian marinated chicken, grilled chicken breast, asian grilled chicken
Prep Time 20 minutes
Cook Time 15 minutes
Marinating time 5 hours
Total Time 5 hours 35 minutes
Servings 4 people
Calories 735kcal
Author Nicole
Cost $25

Fun Things To Do In Delaware County This Weekend For Families And Kids August 6th, 7th, and 8th
August 05, 2021

Why the California Ban on Power Hogging PCs Is a Good Thing
August 03, 2021

‘Dogspotting’ Is A Group Where People Share Only The Best, Unexpected Encounters With Dogs (132 New Pics)
August 03, 2021