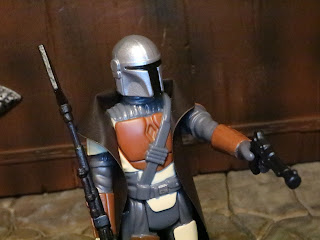 This mini marathon of Star Wars: Retro Collection figures from The Mandalorian just has to include the titular Mandalorian himself, right? Of course! Din Djarin has quickly become one of the most popular Star Wars characters out there and Hasbro of course included him in this set wearing his outfit from very early in the first season. Had this been an actual vintage release you just know he would be almost everyone's favorite figure! He's just a fantastically cool character. Is anyone else getting a little tired of Hasbro just calling this figure "The Mandalorian" on packaging? OK, maybe it makes sense here but I'd really like to see everything start calling him Din Djarin since that's his actual name and we've known it for nearly around years now. Let's jump in and check out the Retro Collection Din Djarin, better known as Mando or the Mandalorian, after the break... 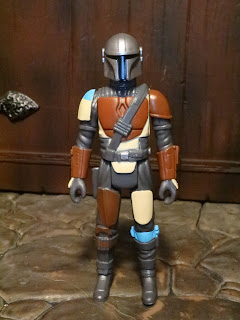 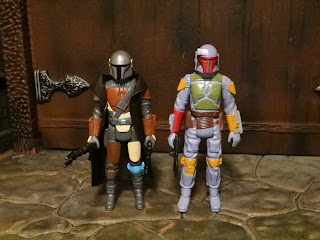 * Just for fun here's a shot of Din Djarin (left) and the 2010 vintage styled rocket firing Boba Fett from Hasbro (before the Retro Collection). Din's a bit shorter but the styles are very compatible and they look quite similar detail wise. The Mandalorian looks a bit more modern, like figures from the ROTJ era, which makes sense. 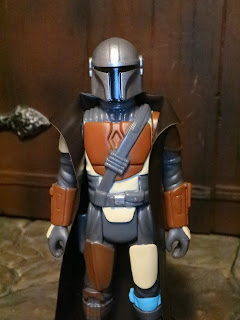 * This is the armor Din Djarin wears very early in the first season (before the addition of the additional Beskar plates) and it looks pretty accurate. Kenner accurate,  you know? The details are nice and the paint work highlights certain areas without being fully accurate, much like the Kenner Boba Fett. It's a simplified take on a complex costume but it works quite well. 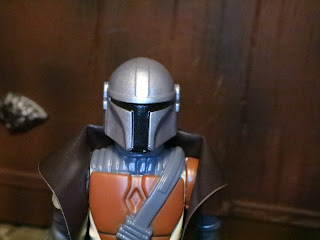 * The helmet looks excellent and has a nice bit of metallic shine to it. The shape of the visor is excellent and definitely feels like a bit of an upgrade of the vintage Boba Fett figure, befitting a figure released during the early 80s period of the Kenner Star Wars line. 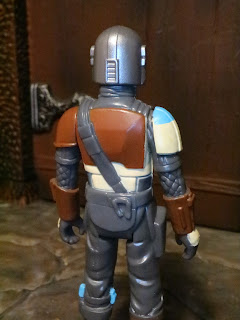 * From the back you can see more details on Mando's armor including his vambraces, a nonfunctional holster, and the padding on his body suit. 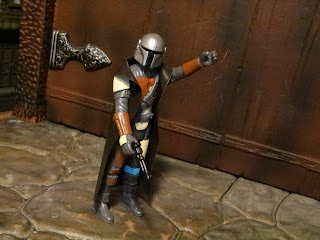 * Just like the other figures in this series (and pretty much every other Kenner inspired retro action figure) the Mandalorian is articulated at the big 5: Hips, shoulders, and head. Din's well made with smooth joints and feels pretty accurate to the vintage Kenner figures. What more were you expecting? 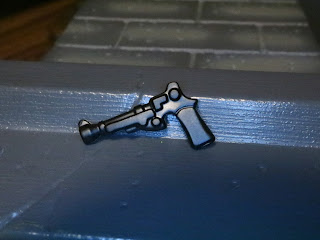 * Din Djarin comes with two blasters, the first being is his IB-94 blaster pistol. It's simple but captures the look and feel of the prop and feels appropriately Kenner-ized for the line. 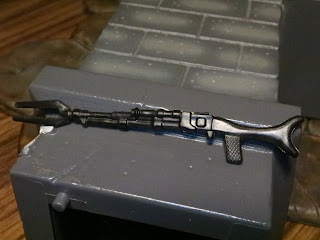 * Next up is the Amban phase-pulse blaster rifle. This is such an awesome weapon on the show and Hasbro did a nice job of offering a Kenner inspired take on it. It's a really long weapon so Din looks kind of funny wielding it but that was true of most Kenner long rifles, wasn't it? He can hold it by the grip or by the stock, so you've got a few different posing options. 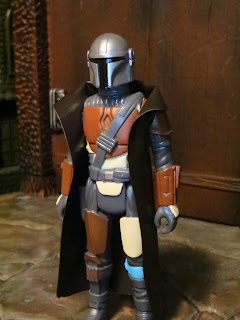 * You know what I'm not loving? The cape on this figure. It really changes the looks and silhouette of the character. Does Din Djarin wear a cape? Yeah, but it's a smaller and doesn't look like this. Seriously, by the Return of the Jedi era Kenner had mostly dropped vinyl capes and was using soft goods and I really think Hasbro ought to have went in that direction. It would have made for a better figure. 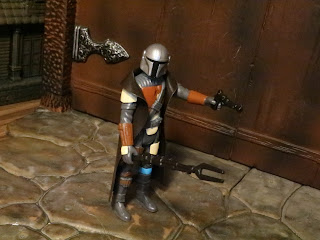 This is still a Great figure as far as retro styled figures go with cool colors, excellent weapons, and some nice sculpted details. He would have been even better with a soft goods cape, though. Kenner really did a nice job with soft goods by the Return of the Jedi era (even a few of the Empire era figures has nice outfits) and Din Djarin would have benefited from this. It would have felt more era appropriate, too. The Mandalorian is still fun, though, and essential for this line, but the little extras like the functional holster similar to Greef Karga and a real cape would have just made this guy incredible.